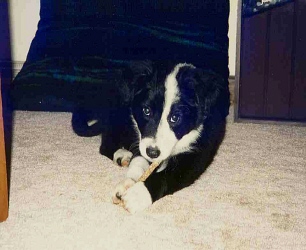 “As we left the house, we immediately noticed a small fenced in area with a lone black and white, roly-poly puppy inside it – the moment of truth had finally arrived. I was filled with a feeling of excitement and anticipation, and yet at the same time I found myself feeling sad the poor little thing was all alone. That feeling faded quickly, however, as we approached and saw her balancing herself on her rear legs while clinging to the top of the fence and vigorously wagging her tail. She was simply beautiful in every respect. Although her coat was primarily black, she had distinctive white markings on her chest, her forehead, and on all four of her legs. She also had piercing eyes and an adorable little pink belly with small black spots. As Andrea and I bent down to greet her, the strength of the connection was obvious to all three of us.”

This entry was posted in Book Excerpts. Bookmark the permalink.